AutoHexII is designed to be a technical assistant, especially in BMW cars to perform a wide range of operations from programming to key making and much more.
Diagnostics Autohex can diagnose all models of SUVs belonging to the BMW Group of companies.
You will get a clear picture of the error codes and their status and you can print it out on a hard copy.

Diagnose
Autohex can diagnose all models of all-wheel-drive vehicles of the BMW group of companies.
You will get a clear picture of the error codes and their status and you can print them on a hard copy
Run ISTAD as a pass and get a detailed agent level to diagnose results, do service jobs, get wiring diagrams, and a lot more jobs needed for the garage.

Individual Programming
This feature allows programming every Electronic control unit individually to the latest flash versions.
Non-compatible used ECU can be programmed to adapt in car depending on various calculations.
The function is easy as one click so the user does not need to do any calculations or find flash versions manually, AutohexII will calculate the latest flash based on FA (vehicle order) and part number.

Enet - DoIP PROTOCOL
Enet is the communication method used between the electronic control unit internally and also between on-board diagnostic systems.
In BMW, it is used in F and G chassis.
It is also approved by all other car brands to remove the complexity and make a stable connection between the electronic units.
AutoHex devices can communicate using this method with cars so that the F/G Series multimedia flash electronic units are safer and faster than expected.

Indvidual Coding
AutoHexII can implement BMW ECU coding individually by selecting the ECU required for coding, this function is used to configure a specific control element regarding the vehicle configuration (vehicle request).

Manual Coding
It is an advanced function available in both E and F series to manually edit various parameters stored within the ECU.

Vehicle Order FA
Vehicle order stores all vehicle configuration data such as model name, production date, engine type, etc.
FA modification is required while retrofitting the vehicle.
The Autohex FA Manager advanced option allows adding or removing FA stored in the vehicle to the desired values.
Vehicle Order (FA) is stored in several ECUs depending on your chassis type.
In autohex, it is possible to restore FA from standby ECU and vice versa as well.
There are also options to load the FA manually with a file.

ISN Manager
The ISN (Serial Identification Number) is a unique internal security number that is stored on all major BMW models to avoid misuse.
The electronic units with ISN numbers are the Engine Control Module (DME/DDE), CAS (Vehicle Access System), FEM (Front Electronic Module), and Transmission Control Module (EGS).
Each vehicle has its own unique ISN which limits switching of controls from one to the other.
ISN Manager option allows to read ISN from DME and cas and make them compatible with each other.
In this way, the compatible ECU used can be replaced from one vehicle to another.

Tricore ISN Boot mode
ISN boot mode allows to read and edit ISN, save EEPROM, reset working hours and change VIN for Tricore DME/DDE in both E and F series.
This procedure is performed on the bench with our ISN tricore boot mode cable which can also be used for CAS and DME reading on the bench.

ISN FACTORY MODE
Earlier, it was necessary to open the cover of the ECU to read or edit the ISN mainly for BMW F series DME / DDE.
Once the Autohex Factory Mode option is released, you can read and edit the ISN stored inside the ECU on the seat without opening the ECU cover or making any holes in it.
By connecting some wires with our Tricore cable based on the connection diagram available in the software itself
It can read and change the ISN (when replaced by the user control).
The working hours of the ECU can also be changed in this mode.
Wide range of BMW E, F and G series ECUs such as MGD1, MEVD1724, MEV1726...etc. Menu supported in factory mode.

CAS4/4+ OBD unlock
CAS4/4+ used in BMW F series chassis mainly used in models like F10, F01,...etc, can open OBD with Autohex II to do work like key programming, ISN editing, VIN changing, mileage break, etc.
This can be achieved on the same plane by cracking the CAS security using a DME ISN.
So there is no need to CAS solder wires or have EEPROM/D-flash for programming keys.
With Autohex II, the whole procedure is performed in a faster and safer manner without any risks of damaging the CAS4.
During the unlocking process itself, Autohex CAS will restore to its original state without any other procedures.

EGS EWS Reset
A transmission that has an EWS security cannot be replaced by another unless it matches CAS or both CAS and DME.
This can be accomplished with a few easy steps in AutoHex.
Supports 6HP E-Series for cas and DME compatibility (only required for E70 and 71)
Supports 6HP/8HP F-Series to reset All car models in F-Series come with EWS transmission security.
AutoHex can reset almost all 8HP models in the F&G series

FEM / BDC unlock
The front electronic unit and body field control are the successors to CAS in later BMW models.
It is combined as one controller which can do ZGW, CAS and FRM functions.
Autohex allows FEM and BDC unlocking to do various operations like program keys, ISN editing, EDIT VIN, etc.

Reset mileage of FEM/BDC
The miles stored in the control can be reset to 0 using Autohex software that will help replace the FEM / BDC with a used one.
When the controller is connected back to the vehicle, the mileage of KOMBI will be adjusted.

Unlock even when all keys and ECU lost
Especially in cases of replacing a FEM/BDC with a used one, it is very difficult to get a used one with a key.
The special function of autohex enables security breaking even without a working key or DME ISN so that once you get the secret file from the software, you just need to match the original car DME ISN and program new keys to it.

Manage Keys
This allows the keys stored in the FEM/BDC to be deleted so that it can free up space and program keys in situations where all 10 slots are used.
Switches can also be disabled or enabled from this feature. 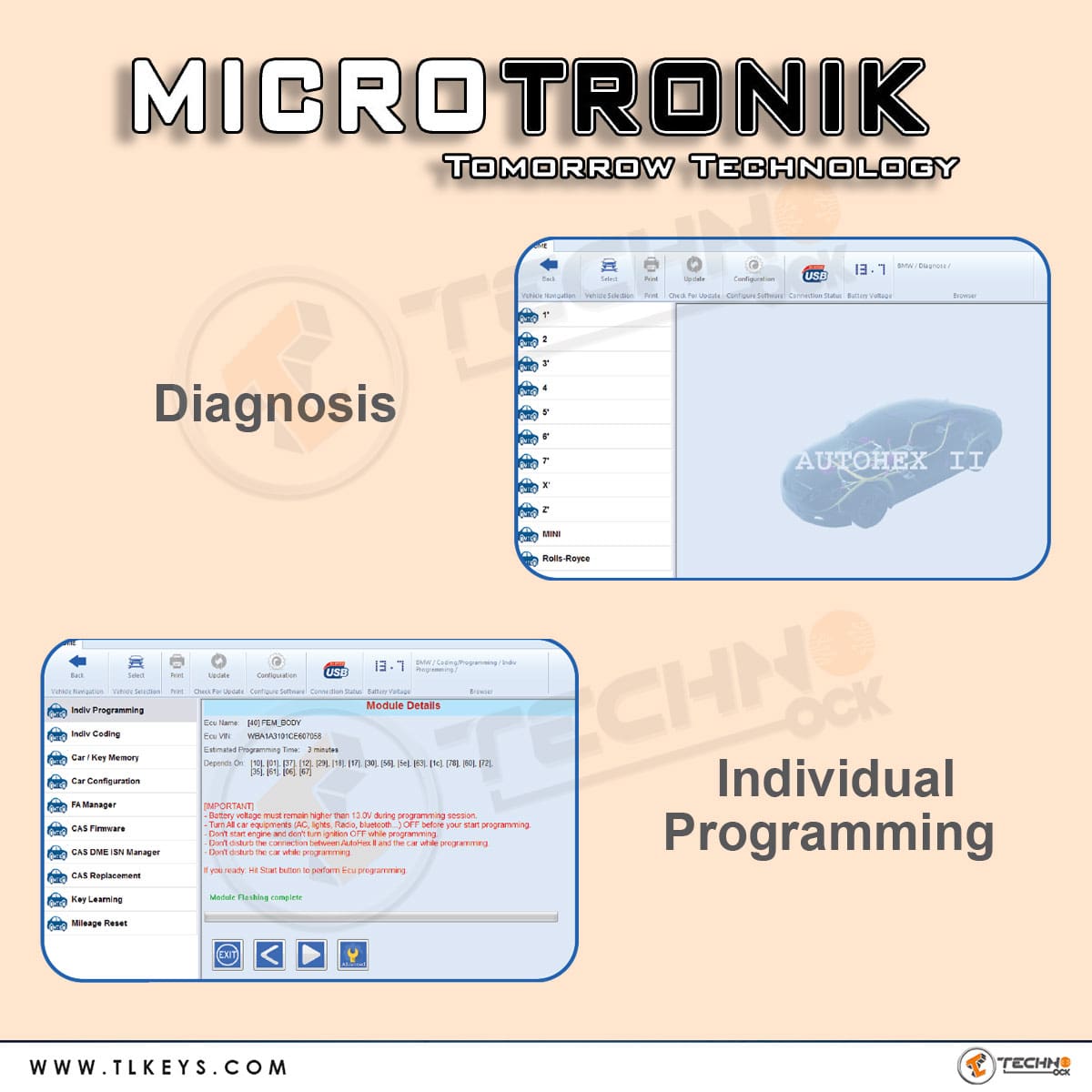 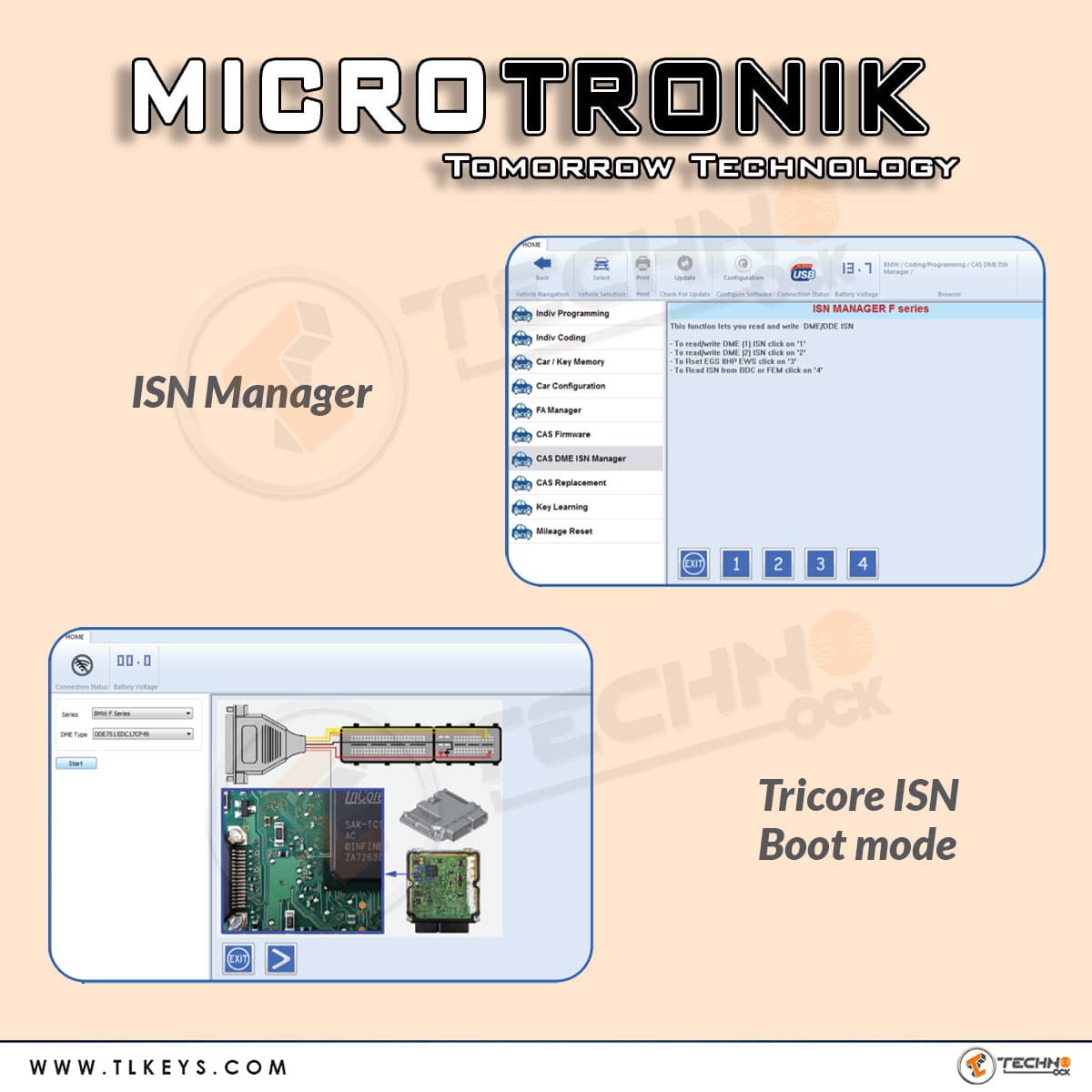 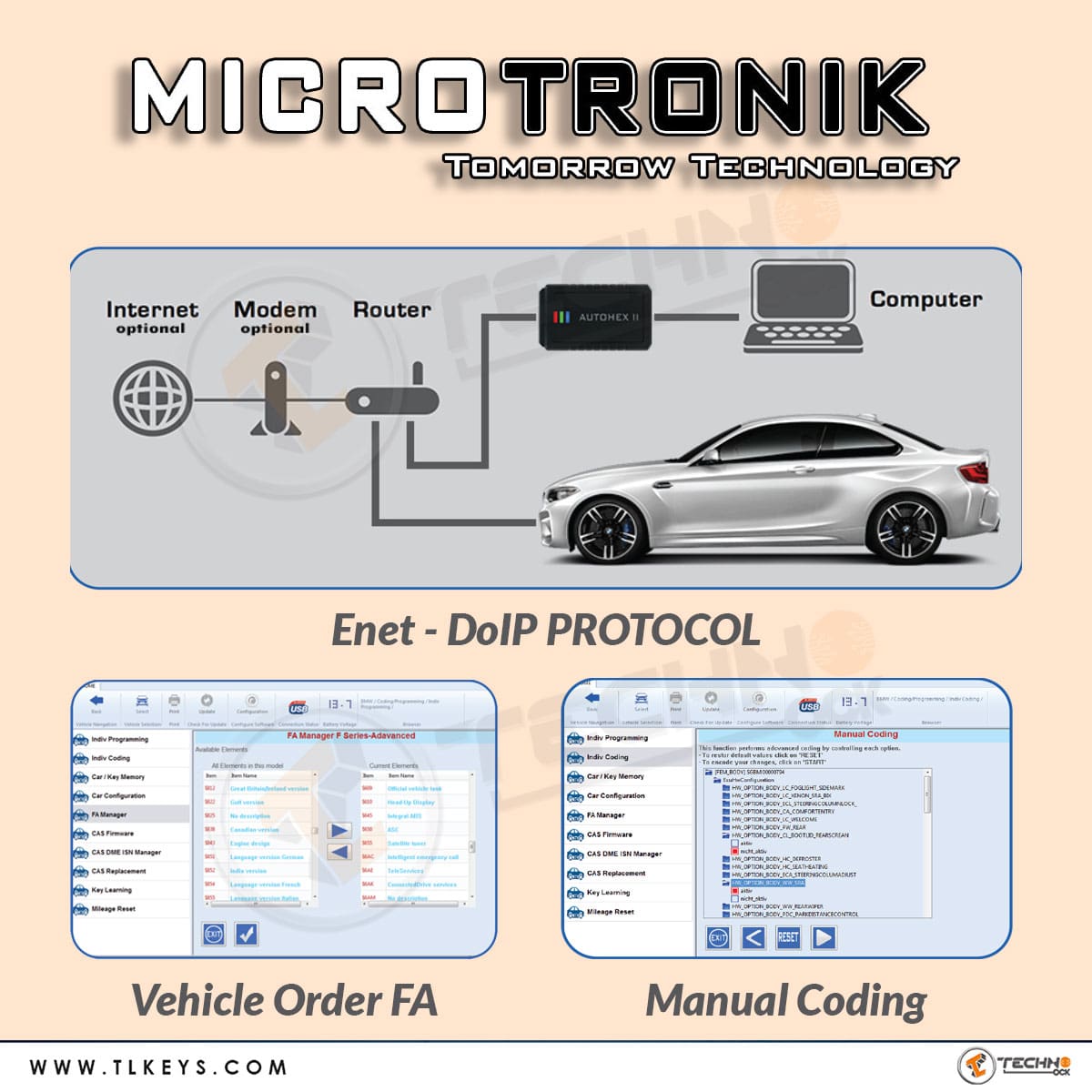 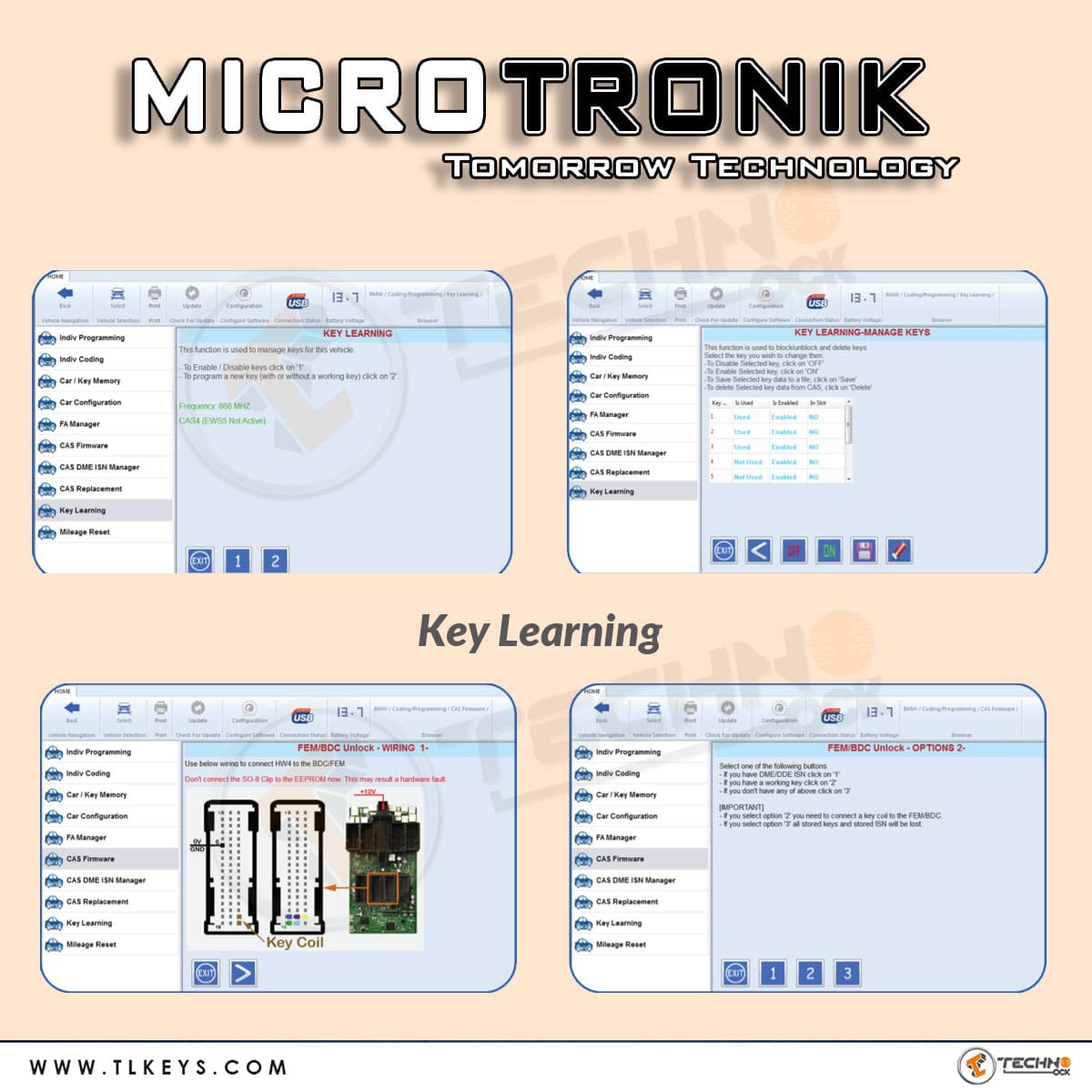